Intelligent and gifted, Ivy was the youngest of 4 children. Her mother was an artist who came from Taunton, whilst her father was Welsh born and worked as a solicitor for the family firm. Following their marriage, they settled in Bristol before moving to Weston in 1868, arriving during the town’s development boom. Her father became a partner for Baker, James and Lillington, solicitors for the wealthy land-owning family the Smyth-Pigott’s. Her father made a series of successful investments in land and property to ensure the financial security of his family.
Coming from an artistic family it was no surprise that Ivy was talented in art. She attended the new School of Science and Art in Lower Church Road in 1895. Her sister Maud went on to attend the Slade School of Art in London. Ivy designed Christmas cards, calendars and postcards alongside her sister.
Ivy was also an active suffragette and designed a banner for the Weston-super-Mare branch of the Women’s Social and Political Union.

Ivy’s postcards are whimsical in character. Her work mainly depicts the innocence of childhood with children placed in a variety of idyllic rural settings. 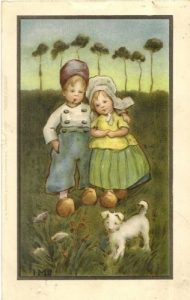 Alongside her sister Maud, Ivy came to prominence through her Christmas card designs. From 1901-1904 both sister’s drawings were sought after by major publishers such as Raphael Tuck, Hills, Faulkner, Valentine and Delgado.
In 1907 Ivy’s postcards make their first appearance published solely by Faulkner. She was 28 years old. Her postcards were influenced by holidays abroad, visits to art galleries and churches.
Ivy’s postcards are interesting in their reflection of activities of the period such as boys smoking. Many of her postcard designs depict children dressed in Dutch costume. This was a popular theme with postcard artists and reflects the popularity of Holland as a holiday destination. The surge of British holiday makers led to a huge market for souvenirs. Postcards were needed to send back home to loved ones. Children would not usually travel abroad with their parents but stayed at home with governesses. Parents would often send postcards home to their children featuring Dutch children.
Ivy’s career as a postcard artist lasted 12 years. The turning point came with the advent of the First World War. One of Ivy’s postcards hints at the ongoing war with its title ‘The Latest News’. Ivy’s last postcards were published in 1919. 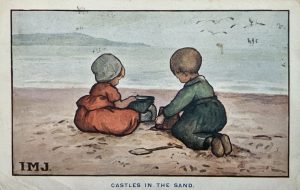 Castles in the Sand by Ivy Millicent James

The turn of the century saw the beginning of a craze for postcards that spread rapidly across Europe. This craze was fuelled by the growing popularity of summer holiday resorts, a result of the development of the railways. The latter of which heralded a new era of mass travel.
Postcards were popular as they were a quick and easy method for people to communicate with each other.
At first postcards depicting views were most popular, then more and more themes were developed to suit a wide variety of tastes. In 1900 there were 400 million postcards sent within the UK.
Examples of some popular themes are fairy tales, scenes from fairyland, nursery rhymes, popular games and past times.

This new genre was a real opportunity for illustrators and artists. However, most postcard artists were exclusively female. This is significant, reflecting the changes in accessibility to art education for women at the end of the 19th century. Girls and women at this time had greater freedom to attend art school. This development came at the time when women were campaigning for greater independence. This opened the way for enterprising and trail blazing women from the middle classes to work, combining and balancing family duties with freelance commercial illustration.
Many women artists entered the industry from the disciplines of miniature painting, flower painting, portraiture and book illustration. It was a medium of greater freedom allowing artists to explore a much wider range of themes.
The reserve collection holds a sizable collection relating to Ivy Millicent James, including postcards, original artwork and personalia. There will be an exhibition of the artist’s work in early 2021.