Generations of Cider Making in North Somerset by Katherine Bell

The process of making cider has been taking place in this part of the country for thousands of years, with evidence of cider making dating back to at least the Roman era. The West Country has some of the nicest apples and the nicest cider in the world, although I may be slightly biased! Enjoyed by everyone from monks and kings to farm workers, cider has had a resurgence in popularity over the last few years and locally made cider is now exported all around the world. 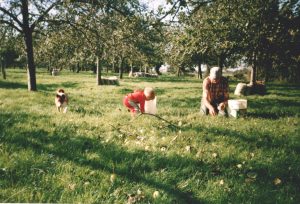 Grandad and Grandson collecting apples together in the orchard 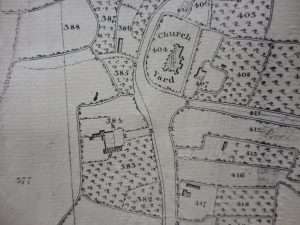 Whilst cider is something that is produced locally on a surprisingly industrial scale, it’s also something that is still produced by individual households, just as local farms and estates have been doing in the West Country for hundreds of years. My husband’s family have been making their own cider for generations, with knowledge passed down over time. We even have a very cute photo of him as a toddler and his Grandad, collecting the fallen apples in the orchard.

The apple orchards in the village of Kingston Seymour are long established ones with tall trees that date back at least a couple of centuries; many of them can be seen on old Tithe maps from 1832. 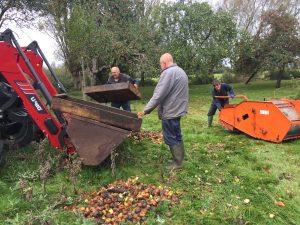 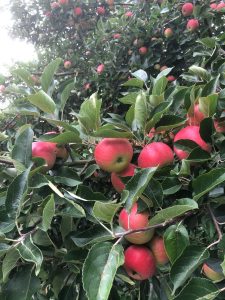 The older tall trees are different to the more modern orchards, which have shorter trees to make picking the apples with machinery easier, whereas apples in older orchards were picked by hand. In the past, farms would have employed seasonal farm hands to assist with different crop harvests and would have supplied them with cider. This meant that the farms who supplied tasty cider were more likely to be able to recruit good workers. Nowadays however, machinery is hired out to assist with collecting apples and drinking cider at work is slightly less encouraged!

We began making our own cider a few years ago, when we were lucky enough to move into a house that already had a fully established apple tree. We think our apple tree is a variety called Discovery and it is quite an early variety, being ready for harvest in mid to late Summer, whereas most others tend to be more towards late Summer or early Autumn. The apples are delicious to eat straight from the tree and make a lovely apple juice, as well as very tasty apple crumble. 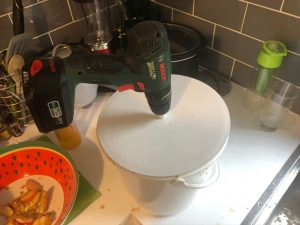 Pulping apples with a drill and bucket

The process of making cider at home requires a bit of equipment and setting up, as well as setting aside a couple of days, but it’s definitely worth it to proudly enjoy your own batch of homemade drink. It starts with picking, washing and cutting up a big batch of apples, this requires a tall ladder and a head for heights! The chopped up apples then need to be crushed to make a pulp; we do this using a lidded bucket and a drill with a metal attachment. This is one of the slightly less historical elements, but it definitely saves a lot of time and effort.

The pulped apple is then placed into the fruit press for all the juice to be squeezed out. We have a small fruit press bought specifically to do this job, but some of the cider presses used on farms over the past centuries can be huge. There are two cider presses in the North Somerset collections; one of these is a typical screw press, which originally came from Banwell and has a base made from sleepers from the Great Western Railway. This press has 2 huge screws to squash layers of apple pomace wrapped in horsehair matting and would dwarf our little domestic fruit press. 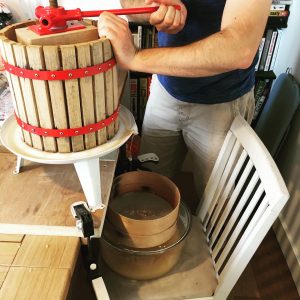 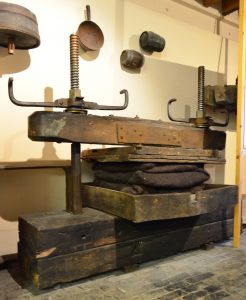 The apple juice is squeezed out gradually pouring into a bowl covered by a sieve, before going into a bit pot. The apple juice is later put into demijohns, into which brewers yeast and sugar is added to start off the fermentation process. This is a great stage to observe over the course of a few weeks, whilst the liquid bubbles away. Various measurements are taken to check acidity levels and similar elements, perhaps with a second fermentation undertaken to make the cider a little stronger, if desired. Once the fermentation is finished and the cider is ready, it is decanted into bottles to be stored away with a little kept back to enjoy as a perk of the job. 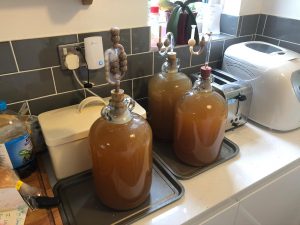 I’m told that farms could expect to make 100 gallons of juice per ton of apples, but our production is a little smaller. Each year we have made about 20 litres of apple juice that is bottled and put into the freezer, as well as at least 20 litres of cider to enjoy over the coming year, just from our one apple tree. It’s nice to know that we are continuing a tradition that many previous generations have undertaken in this same bit of the world (albeit in a slightly modernised version). If you have an apple tree or two at home then making your own apple juice or cider can be a great way to enjoy a tasty drink and experience a little bit of local tradition at the same time.