Curry is one of the most popular forms of food in Britain. Whether one enjoys the intense spiciness of a Vindaloo or the gentle heat of a Korma, it has been quite consistently at the forefront of British tastes.
It is so popular that the UK actually celebrates National Curry Week every October, with the dish contributing more than £5 billion to the British economy. However, if you simply ask for curry while visiting India, there may be some confusion. That word doesn’t really exist in Indian cuisine.

Curry is the anglicised version of an Indian Tamil word – ‘Kari’. Linguists often disagree on the meaning, with anything from ‘peppered’ to ‘side-dish’. This also potentially translates rather suitably to mean ‘sauce’. Also notable is the meaning of Kari in various Dravidian languages (of which many are based in Southern India & Northern Sri Lanka). In these languages, the meaning varies a great deal once again. Generally, the meaning centres around boiled meat (or vegetables). 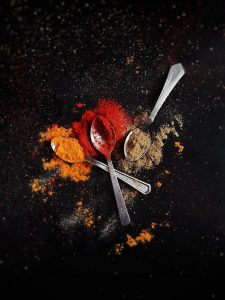 Here in Britain, we have our own creation for cooking curry in the form of curry powder. However, a classic curry tends to have some spices which act as the starter for the rest of any recipe. These spices are usually: turmeric, coriander, red chillies and cumin.

Those among us that have a milder palate need not fret. The average Korma in Britain is much less spicy than the average one from India. Yoghurt or cream is often used in curries as a thickening agent. For British versions, however, these ingredients are used to mask taste of the spices. That, along with the prevalence of Ghee (Butter without the milk solids and water) in Indian cuisine results in a redder colour for the sauce than we might typically expect. 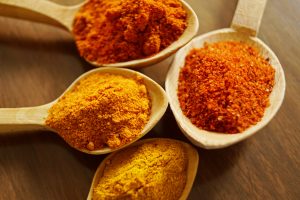 Perhaps the most disputed dish among all ‘curries’ in Britain is the Chicken Tikka Masala. According to a 2012 survey, Tikka Masala was the nation’s second most popular dish to cook.
Some consider it an ode to Britain’s multiculturalism along with a celebration of adaptation. However, the dish’s creator is often a matter of debate. The inspiration is believed to have come from Punjab, India. That being said, various restauranteurs take credit for the invention of Chicken Tikka Masala.

One aspect which is generally agreed upon is that this was probably an accident.
The story usually goes something like this. A customer comes into an Indian restaurant and asks for a chicken curry. When it is served, the customer is disappointed and finds the dish to be too dry. In a haste to please the customer, the chef added tomato soup, along with some spices. The customer absolutely loved this change and came back again, prompting this to be placed onto the menu amid a surge in popularity.

Try making a Chicken Tikka Masala for yourself using the recipe below!