We continue with the theme of Britain’s favourite takeaways & fast food. This week, we look at Hamburgers! 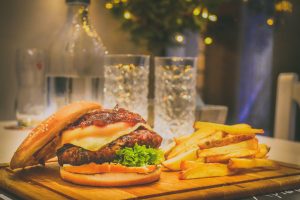 Burger with fries on the side.

Believe it or not, the origins of the basic hamburger can be dated all the way back to the Mongol Empire. You might be wondering how, when its name is clearly derived from the German city of Hamburg, could the Hamburger has found its start with Genghis Khan?
Well, the general consensus follows this logic. During the reign of Genghis Khan (who lived from 1162 – 1227) and his successors, entire villages would follow the armies. There wasn’t always time for the entire population to settle down while migrating, so they had to improvise. They could often go days without dismounting, so eating quickly was a must. 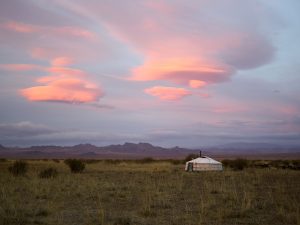 Mongolian yurt in a field beneath a sunrise.

The Mongols managed this by forming scraps of lamb or mutton into patties and tenderised the meat by placing it under their saddles. Eventually this became much more pliable, ready to be eaten raw. Perfect for the Mongol on the go!

The Mongolian Empire extended its reach toward Russia (1238) under the rule of Genghis’ grandson, Kublai. When they got to Moscow, the Russians took this design and changed it for their own tastes. They called this adaptation ‘Tartare Steak’ in acknowledgement of the Mongols (Tartars was another word used for Mongols). This adaptation included such additions as chopped onions and raw eggs, which was still a little way away from what we recognise as a hamburger.

Over the next few hundred years, trading ports would prove to work to the Hamburger’s benefit. The tartare steak made its way to the port of Hamburg. Once the United States had been established as a new nation, German immigrants brought some of their favourite foods along with them. Naturally, this included the tartare steak. This steak had once again changed; this time it was quite a common meal among the lower classes. It had been adapted to what they could afford, and as such was quite a low grade meat with a few local spices.
Nonetheless, this was still a comfort food. This is evident due to the fact that vendors in New York often tried to attract sailors with the prospect of ‘Hamburg Steak’.

It was apparently not until 1891 that the hamburger was first placed on a bun in Tulsa, Oklahoma. Perhaps quite appropriately, it is dated as taking place on July 4 of that year. This fact resulted in the Governor of Oklahoma in 1995 proclaiming Tulsa as ‘The Real Birthplace of the Hamburger’.

Perhaps the most famous champions of the simple hamburger are the fast food giants McDonalds & Burger King. These opened their doors in 1948 and 1954 respectively and became a global phenomenon thereafter. There are at least 55,000 restaurants between them around the world which serve millions of customers. To give a little bit more of an idea, in 2012 it was estimated that the two of them combined served at least 77 million customers per day! More than 1% of the world’s population were eating burgers (or other parts of the menu) every day! 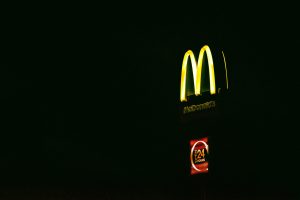