The Persecution of The Cathars

The Persecution of The Cathars

This early form of Christianity, whose members were martyred by the Roman Catholic church in the 12th and 13th centuries, had spread widely over the northern Mediterranean counties, largely thanks to its generosity towards, and tolerance of, other beliefs.

The Cathar doctrine is based on the separation of ‘good’ from ‘evil’: they believed that God reigns over a spiritual world of beauty and light, opposed by the physical world which is governed by Satan; man’s presence in the world is a Satanic trick, and so Cathars strive to separate themselves from the material world, and to restore themselves to divine purity.

It was based on the Far Eastern faiths Zoroastrianism and Manichaeism, which believed that the world was created by the Powers of Darkness; later, its adherents came into contact with Buddhism, adopting a belief in reincarnation and the eventual attainment of the Realm of Light; and Bogomilism, whose name meant Friends of God. When it then spread to Greece, its new name of Catharism was taken from the Greek kathari, or pure ones.

By the late 9th century, these ideas had reached the Balkans, continuing westwards across northern Italy and into France during the 11th and 12th centuries.

At that time, the Roman Catholic faith reigned supreme, so the Cathars came into conflict with the orthodox Christian church by interpreting biblical texts in the light of their own doctrine: for example, although they insisted that they were true Christians, to them Christ was only a messenger from the Realm of Light, and not the Son of God.

A significant feature of Catharism was the hierarchy of believers: its leaders, known as Parfaits, led an austere life (which came to be seen as a reaction against the laxity of the Roman Catholic clergy) and followed the ascetic ideals of poverty, chastity, patience and humility. They were considered to be men of God who had already seen the Light, and as such were venerated and cared for by the ordinary believers, or Croyants.

The Cathar church administered only one sacrament, the Consolamentum, which varied according to the occasion – the ordination of a Parfait, or the blessing of a Croyant on the point of death so that he would be admitted into the world of Light. Apart from that, Croyants lived pretty much as they chose, simply gathering together for prayer meetings, public confessions and other ceremonies.

Their beliefs, way of life and religious rituals came to be perceived to be a rejection of Roman Catholic principles; in addition to that, their tolerance of different customs and attitudes, particularly in the financial and commercial areas where they lived and worked in peace with Jews, gave rise to disputes with the Catholic clerics.

Even more opposed to the Catholic ideal was the fact that, far from being excluded from holding positions in the faith, women were equally qualified to become Parfaites, and leaders of their communities; many were acclaimed herbalists, doctors and midwives.

Killing – which included making war – capital punishment, slavery and cruelty towards people and animals were not allowed; many Cathars and all Parfaits were vegetarian; and complete acceptance of all other races, creeds and colours was central to their faith.

The Cathar heresy (any belief contrary to orthodox Christianity) spread out from the towns and reached into the fertile lowlands, corresponding with the area between Carcassonne and Toulouse, Foix and Limoux, which was dominated by the rich and powerful cloth industry with its products exported from Narbonne to the Levant. 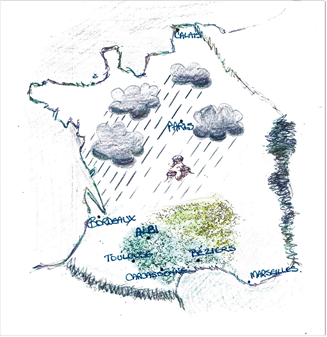 (above) Not to scale: but showing the sunny, mellow south and its contrast with the rainswept north, and the volcanic uplands of the Massif Central.

Many of the Bonshommes (Parfaits) were textile manufacturers or merchants; while powerful lords such as Roger Trencavel, viscount of Béziers and Carcassonne, and Raymond, count of Foix, believing it to be a peaceful and sympathetic faith, supported the heresy.

However, trouble was brewing, as the Pope’s opposition to Catharism gave the Capetian monarchs of Paris the opportunity to extend their rule into the sunny, fertile eastern Pyrenees. The Pope, determined to crush this rival religion, enlisted the help of Philippe Auguste (1180-1223), the seventh Capetian monarch. Never mind defending the Catholic church: the principal of Crusading, which was to give the territories of the vanquished to the victors, appealed both to the King, who saw all the advantages of the wealthy cloth industry, and to his courtiers, who were tempted by life in the pleasant, sunny south as compared to the harsh climate of the cold, wet north.

Strict regulations were promptly passed proscribing the fortification of churches, which had been the custom since the end of the tenth century in southern France. From then on, the die was cast, and with both the King and the Pope against them, the Cathars’ peaceful way of life was set to end.

1150 St Bernard arrived in the Albigeois region, on a mission to convert the Cathar heretics. (Cathars were also known as Albigois, or Albigensians, named for the town of Albi). They greeted him politely, and were as tolerant towards him and his beliefs as they were to all other faiths – including the Jews.

1160 The Cathar religion, continuing to react against the avarice and immorality of the Catholic Church, had become well-established throughout the region.

1167 The bourgeois of Béziers turned against their lord Trencavel and killed him.

1179 In view of St Bernard’s failure, the Third Lateran Council drew up plans to enlist some secular muscle to further their cause.

1198 Upon his election, Pope Innocent III called for a Crusade against the Cathars, and sent the missionary Domenic Guzman (later St. Domenic; remember the Dominique-nique-nique of the Singing Nun’s hit song?) to convert them. This attempt failed, leading to sterner measures.

1204 Pope Innocent III sent three delegates to preach against the Cathars, and to persuade the Count of Toulouse, Raymond VI, to withdraw his protection.

1207 Having refused, the Papal delegate Pierre de Castelnau threatened the peace-loving Raymond VI with excommunication and the confiscation of all his territories.

1208 On January 15, Pierre de Castelnau was assassinated: Raymond VI was immediately accused of his murder.
This incident sparked off the First Albigensian Crusade, preached by Pope Innocent III in March of that year. Knights from the Paris region, from Normandy, Picardy, Flanders, Champagne and Burgundy, as well as noblemen from the Rhineland, Friesland, Bavaria and Austria rallied first under the command of Abbot Arnaud-Amaury of Cîteaux, then under Simon de Montfort. This Holy War was to last for more than twenty years.

1209 The Crusades began. On 23 July, Béziers was sacked; its 7,000 inhabitants, plus another 10,000 who had sought refuge, were all massacred, the Archbishop of Narbonne giving his famous order: “Kill them all. God will recognise His own”.
On August 15th, Carcassonne was besieged, and finally fell because of a lack of water.
Viscount Raymond-Roger de Trencavel was captured, and his place taken by Simon de Montfort.

1210 De Montfort continued his Crusade, capturing one Cathar fortress after another: 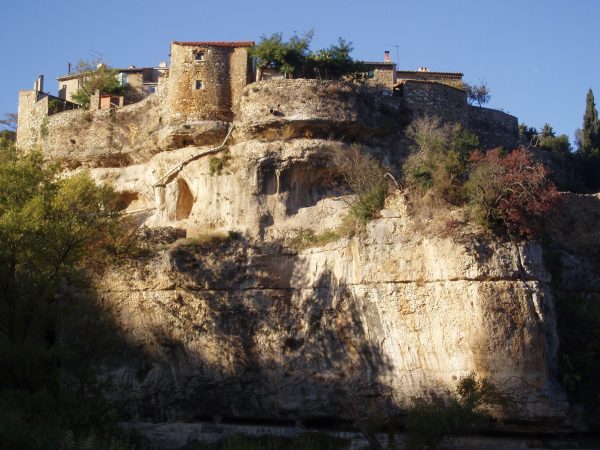 on July 22 it was Minerve (above); on November 22 Termes, where sickness and thirst forced the surrender, rather than any skill on the part of the besiegers; followed by Puivert and Lastours.

King Philip of France is said to have “turned a blind eye to Simon de Montfort’s crusade, of which he disapproved; but readily accepted the spoils to his exchequer”.

1211 On March 12th, Cabaret fell. Shortly afterwards, on April 17, the Count of Toulouse was excommunicated, and his lands given to Simon de Montfort.

1213 The key territories of the eastern Pyrenees then fell in succession, culminating in Muret on September 12th, where King Pedro of Catalonia, fighting on the Cathar side, was killed.

1215 By now, all this conquered territory, formerly owned by Raymond VI, Count of Toulouse ¬– a tolerant and wise ruler ¬¬ ¬– had gone to the ruthless professional crusader Simon de Montfort, Count of Leicester.
Raymond VII avenged his father with a war of liberation, lasting for eight years.

1218 Peace returned temporarily to the Languedoc when Simon de Montfort was killed in front of the city walls of Toulouse, on June 25th, while besieging Raymond VI, Count of Toulouse. De Montfort was succeeded by his eldest son, Amaury.

1226 The Second Albigensian Crusade was preached, even more ruthless than the first, and this time under the leadership of the King of France himself, Louis VIII. The Holy War rapidly became a political struggle, until Raymond VII of Toulouse and Roger-Bernard II of Foix were forced to make a humiliating peace.

1229 In the Treaty of Meaux-Paris, Blanche of Castille effectively annexed a vast territory to the French Royal estates – a century later this area became known as the Languedoc.
However, the battle against Catharism was not over.

1231 By now, Catharism had been forced into the least accessible fortresses.

1233 On April 20th, Pope Gregory IX entrusted the Inquisition, an exceptional tribunal with the duty of unmasking and condemning the few remaining Cathars, to the Dominican Order

1242 Pierre-Roger de Mirepoix, governor of the main Cathar stronghold of Montségur, undertook an expedition to Avignonet with the intention of killing off the members of the Inquisition Tribunal.

1243 In reprisal, six thousand Crusaders then installed themselves at the foot of his castle, whose natural defences and precarious hill-top position made it almost impregnable, for a siege lasting ten months.

1244 The siege finally broke, on March 1st, and on March 16th, the 215 remaining unrepentant Cathars at Montségur were burnt to death on a single pyre. 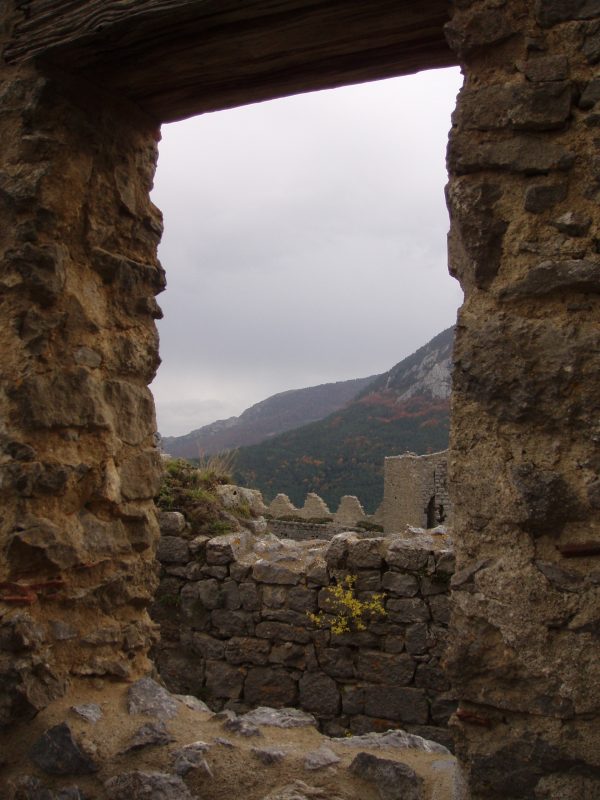 Those still espousing the Cathar doctrine took refuge in the fortress at Puilaurens (above), where they were butchered shortly after the fall of Montségur.

1255 The war against the Cathars reached its final, bloody, conclusion with the siege and fall of Quéribus, their last remaining stronghold.

1282 Bernard de Castanet, Bishop of Albi, laid the first stone of the Cathedral of Ste-Cécile. Its massive structure and the height of its brick walls (40m/131ft) give it the appearance of a fortress in the heart of the subjugated Cathar country. 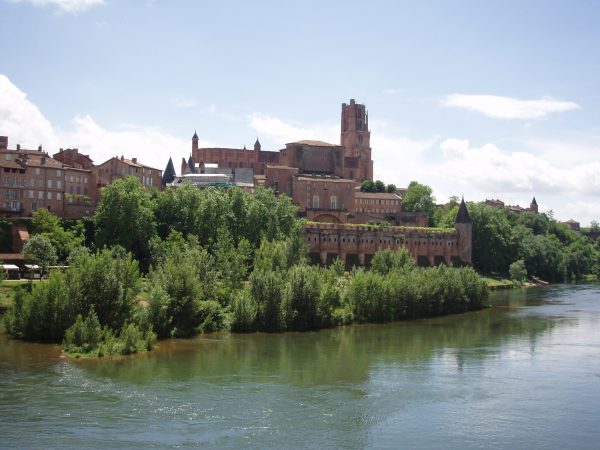 1318 – 1325 Although the leaders of the Cathar religion had been murdered at Montségur almost a century before, Montailllou was the last village in France with a significant number of Cathar families.
In 1318, the Inquisition accused 25 Montaillou villagers of heresy, and they were tried between then and 1325.
The Inquisitor, Jacques Fournier, went on to become Pope of Avignon in 1334, as Pope Benedict XII.

1328 In a blend of history and legend, a group of the few remaining adherents to the Cathar faith were said to have been walled up in the caves, by the Inquisition, at Lombrives (just south of Tarascon).

The fall of Montségur in 1244 and the death of those last Cathars marked what was virtually the end of this peace-loving, tolerant religion. Four allegedly escaped the flames, taking with them an unknown ‘treasure’ of the Cathars, claimed by some to be the Holy Grail.

What became of this treasure no-one knows, but some believe that it was found within living memory on the banks of the Aude, only to disappear again.

Any cookies that may not be particularly necessary for the website to function and is used specifically to collect user personal data via analytics, ads, other embedded contents are termed as non-necessary cookies. It is mandatory to procure user consent prior to running these cookies on your website.

SAVE & ACCEPT
Go to Top