What's on at Weston Museum

This event has passed. 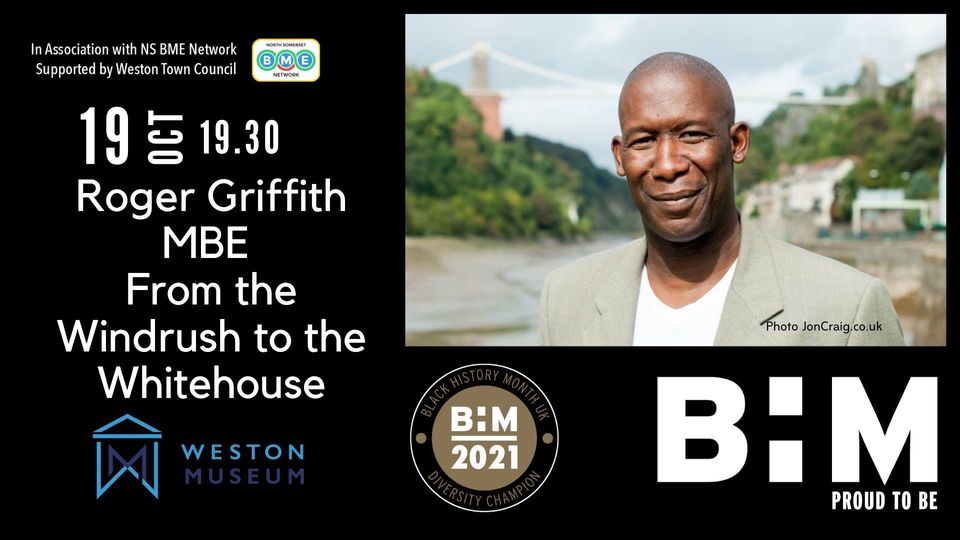 An evening with Roger Griffith

BME Network is proud to present for Black History Month – ROGER GRIFFITH MBE is a writer, producer, educator and social activist.
He is a consultant and CEO of his company Creative Connex. He lecturer’s and works on special diversity projects for UWE Bristol, including working on the team that helped Channel 4 move to Bristol. He is a broadcaster and former CEO/Chair of Ujima Radio an award-winning community radio station. He has a passion for sharing cultural stories, global observations and insights on race, inclusivity and striving for social equality.
He is currently exploring his passions becoming an Arts Council England funded artist and researching his second book non-fiction Reflections Across a New Black Atlantic. He has completed his first play Dreams of My Fathers based on the life and presidency of Barack Obama and a fiction book exploring male relationships and toxic masculinity entitled Boyz Weekend.
In 2019 he was awarded the MBE for services to Diversity and Arts.
After leaving school without qualifications, Roger rediscovered the purpose of education through understanding his heritage which changed his life. He entered local government with no experience as a trainee Housing officer with no experience and became a senior manager.
In his first book My American Odyssey, Roger reflects on the experiences of the first generation of Black-Britons born in the UK. Growing up within two cultures, through Thatcher’s turbulent 1980s to personally watching the inauguration of the first black man as the US president, Roger explores the influence of Black-British and African-American culture through the prism of civil-rights in education, religion, music, sport and now politics as he travels through the famed Deep-South of America.
Roger writes regularly for a cultural online magazine Bristol 24/7, Bristol Post and appears as a pundit on BBC Bristol on the issues of race and social issues. He works tirelessly to promote those from disadvantaged and diverse backgrounds who consider themselves without a voice or opportunity through his community consultancy Creative Connex.
He has a passion for sharing stories, observations and insights on a perspective seldom shown – the special relationship between America and Britain, as seen through a black man’s eyes.
In sharing his story, an evocative combination of travelogue, history, and social commentary, Roger celebrates the lives of African-Americans, West Indians and Black Britons, from their roots of origin to the present day, as a new era of hope is not just dawning but continues to rise.